All other things are never equal.

Anyone who has taken basic economics understands the theoretical tradeoffs between supply and demand. As the Add Slider price goes down, demand goes up. As the price goes up, demand goes down; ceteris paribus, which means “all other things being equal.” The problem is that, in the real world, the other factors are never as equal as theories like this suggest!

Ceteris paribus also assumes you can go out and survey every potential option in the market to find the best price. Most of the time in life, that is improbable if not impossible; especially when you factor in sun, opportunity, and switching costs.

In a perfect world, you could see every single home available in the area and take your sweet time figuring out where to rent or buy. But that’s not how it works. At best, you are seeing 3-6 months of inventory and likely only a few weeks based on what’s available and the depth of your search period.

The average home buyer sees 10 homes. Let’s take a cosmopolitan area like Queens, NY, where there are around 10,000 homes sold each year. That means ~5,000 homes are available in a 6 month search period. Breaking down further to neighborhoods let’s say the consideration set is 500 homes. That means 10 homes is only 2% of the available inventory. This is absolutely no way you can effectively survey the entire market.

We are in the midst of the Great Resignation, and talent is moving faster than I have ever seen in my career. Similarly to house hunting, the idea of the market implies that we could survey every single employer interested in our talents, get a thumbs up thumbs down, evaluate the finalists and pick the one that fits you best. I have searched multiple times in my career and coached dozens of folks; I can say that is a pipe dream. Company A wants to move fast, but Company B wants to move slow. Company C gives you an offer but needs to know precisely one week before Company D, your dream employer, gives you your first interview. The incentive is for an employer to lock you up quickly so someone else can’t have access to you. A few years ago, when I was on the hunt, I had two offers in hand in the middle of the month, but an interview with a dream employer wasn’t till the 31st.

I was able to kick the decision point by a few weeks and eventually didn’t proceed with the dream employer. Had things moved forward, I would have had to accept one of the options on the table without having enough time to evaluate all potential options. According to my friend and career coach extraordinaire Ryan Dickerson, applicants with solid referrals, LinkedIn profiles, and resumes can expect to see roughly a 10% response rate.

“Let’s say that you land the 5th job you were selected to interview for. By then, you will have proactively applied to 50 appropriately suited positions, and you will have networked with 50-150 connections/recruiters/talent acquisition professionals along the way,” he told me.

Simply put, with timing and building a pipeline, it is impossible to accurately survey the entire bevy of options at your professional fingertips.

I am happily in a long-term committed relationship but remember the stress and trauma of dating. The dating market is arguably the hardest thing to solve as it is intimately tied to our emotions. Since we are all unique snowflakes, there is not much of a baseline to compare individuals beyond how they make you feel. You can emotionally detach yourself from work or your home. Despite stoic philosophy being all the rage these days separating yourself from a romantic relationship feels like entry-level psychopathy.

According to the census, approximately half of US adults are single. With ~19M people in the NYC metro area, that leaves 9M, single folks. Given I was searching for a jew and a woman, 2.4% and 50% respectively, that puts the total market at 108,000 individuals. I set my apps to 25-35 rage, which is 12.5% of the population which gets the final number to 13,500 women in my target market.

I was pretty intentional and proactive about dating and felt like I had about two dates a month for a decade. To find my partner, I only sifted through less than 2% of the available “supply.”

TLDR: for the essential things in your life, you are often viewing a fraction of a fraction of the total options available, which makes selection hard primarily due to a lack of complete market visibility.

What to do about it

As I go deeper into my 30s, I think one of the more complicated challenges in life is making decisions with incomplete and often imperfect information. Jeff Bezos is known for trying to make decisions with 70% information, and Reid Hoffman likes to aim for 80% if it means moving fast, so, in my mind, 75% is a great place to be.

Wait any longer and you risk hitting analysis paralysis or making a decision too late. That said, approximating percentages is easier said than done, so it helps to have heuristics to help you through the process. A few of my favorites…..

When money is involved, it’s a little easier to do the math for the options on our plate. Economics tells us to fall back on expected value which at its most basic form is multiplying the upside by the odds of getting it. For dating, it’s impossible to calculate in these terms. For buying houses, it’s still difficult. But with salaries, it is pretty straightforward.

Two job searches ago it came down two finalists. I don’t think anything is ever 100% certain in life, so for Applico, the consulting opportunity, I gave it a 90% chance.

The calculation was a little more complicated when it came to the political campaign. In September 2019, Andrew Yang was one of 8 or so remaining candidates. With a general election a year away, the job was, at best, a one-year gig. So to account for that, it likely was a job and not a career; I dropped the 12.5% to 10%. Even though I was unquestionably more passionate about the Yang campaign than consulting, I knew the math made no sense for me to take the job.

Four months after this, Andrew Yang suspended his campaign, which meant that had I accepted the job I would have only earned about $8,000 and then would have to start the entire job search machine all over again.

Downside awareness is the most accessible lens to look at risk through. Risk doesn’t always have to be avoided, but, at a minimum, it should be part of the decision-making process. With things like housing, dating, and employment the downside is usually pretty tame with losing some money or going on a bad date. The downside comes into play more with health-related concerns.

This year and last, I’ve been reading and writing in The Daily Stoic Journal. One of the big messages it preaches is to think about the downside and realize how it isn’t actually that bad. What is my current downside? I lose my job, I burn through my savings, and if somehow after a few years and I haven’t made a dollar I have to go hat in hand to my family and friends asking for support. Sure, it may be embarrassing or emasculating, but with no health consequences, it won’t kill me, and just realizing that gives me a sense of peace.

Play the tape to the end

I really value long-term thinking and get frustrated with short-term orientations. If you’ve worked with me you’ve probably heard me say “play the tape to the end” which means to take the thing you are focused on and look a week, month, and a year forward and explain how it plays out.

You buy the apartment in queens, so it stands to reason you’ll be living a Queens-centered life in the coming years. You take the job in consulting and your career path then orients mostly around consulting.

I find a surprising amount of people making short-term decisions without considering the long-term outcomes. Often this is referred to as “second-order consequences” and I find it to be helpful to remember this when evaluating the big things in life. 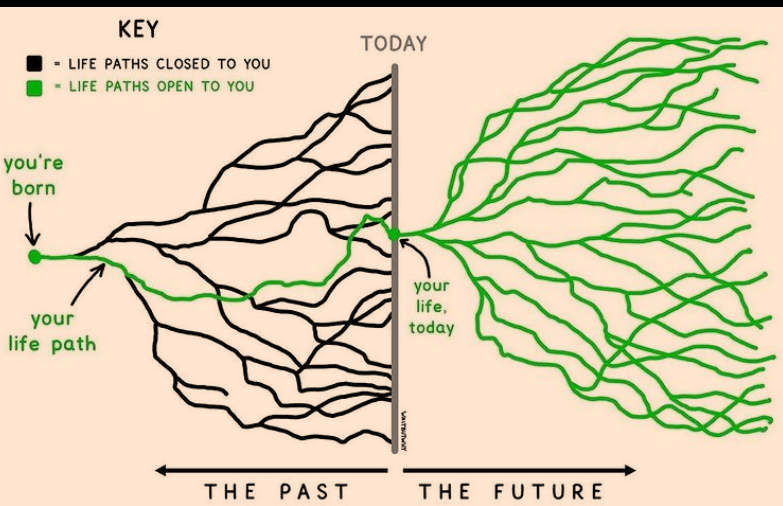 My 20’s were all about entrepreneurship. I earned not one but two degrees specifically in the discipline and then went on to raise money and build product for a startup I cofounded. I’ve always been interested in this corner of the business world but I often think the wrong lens is applied for new ventures.

The narrative we hear is that the lightbulb goes off for a world-changing idea like Instagram and then you lock yourself in a garage for months at a time and just build. Inherently, this is doing something that’s never been done before, so there is a massive learning curve associated with something new.

Instead of doing something that’s never been done before, some of the smart entrepreneurs I know and admire are looking at what they already have on hand as a foundation for creation. This is known as effectuation.

Effectuation is predicated on leveraging what you own or know or have access to when starting something new. You already have the home, the laptop, and other foundational assets. By using what is already in your pocket or brain to get started the barrier to entry is almost nonexistent, which gets you in business sooner and lets you get near-immediate feedback from the market.

Almost everything can be tested. A date is a test for marriage or for a long-term partnership. An interview is a test for a job. There are very few things in this world that can’t be broken down into smaller digestible parts. We buy something at the bodega before committing to buying a 100 pack at Costco yet we don’t move this lens to more important things in life.

You can test drive the car before you buy it and maybe spending a night in a home before you buy is hard but certainly not impossible. Jobs are an often overlooked area where testing can make a huge difference.

This is admittedly harder at larger companies but pilot projects, like my friends at Laskie describe, are a great way to test the waters before making a life-changing decision like employment.

I’ve found that just having any process for making important decisions matters more than which lens you choose to look through. You have to be intentional with big decisions, especially when there is no formulaic way to process them. They often have farther-reaching implications than you can tell on the surface; yet, you often need to execute without slipping into “analysis paralysis.”

If you’re used to making decisions without a framework or are stuck with a single lens, try picking one of these up the next time. Even just writing these down makes me feel better about having a process for important decisions. Am I missing any important lenses? Let me know in the comments.